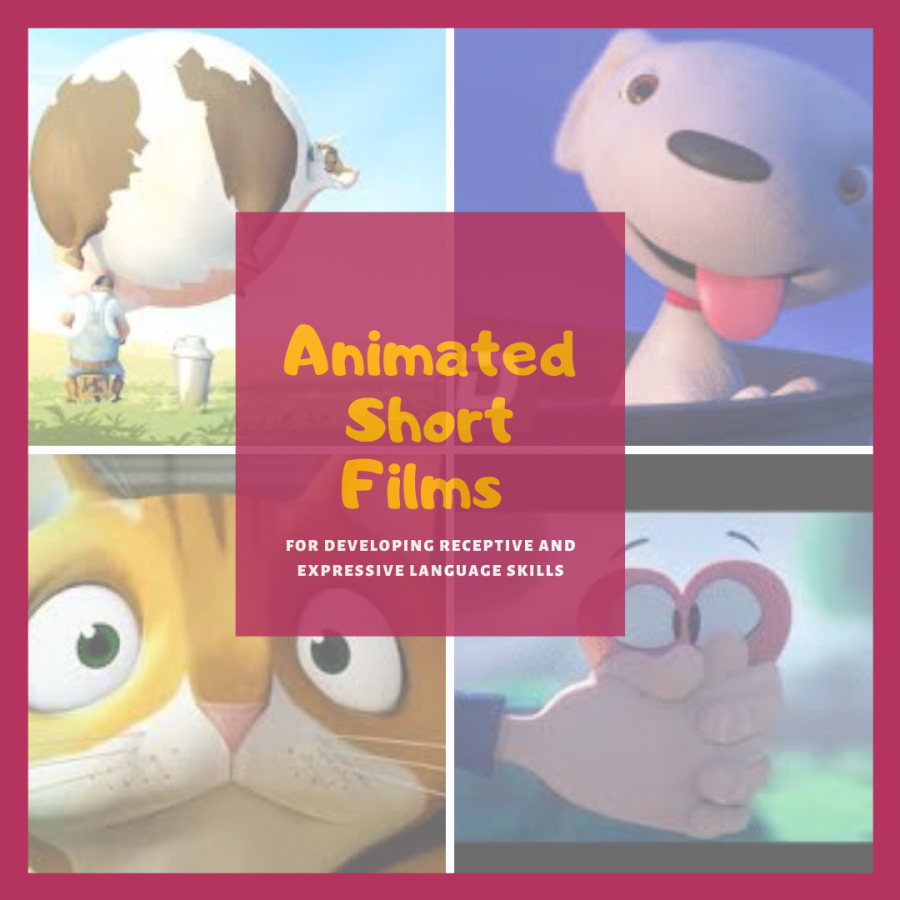 I’m going to be a little real with you guys and maybe some of you might agree. I am not one of those amazing TPT creators that produce incredible content with those adorable graphics.

Not only am I not creative, but another important factor that many other therapists and educators also experience is a lack of time!

One of my main strategies is to rummage the web for pre-made activities and I generally have great luck finding great resources. However, the majority of the content that I find is only in English. The search becomes much harder when seeking activities to use with bilingual speakers.

When I know that I have access to technology (computer, iPad, phone) my go-to strategy is to search for animated short films on Youtube. These films are excellent because they are animated and engaging but there is no dialogue in the films. This is the key that allows these videos to be used with speakers of any language!

How to Target Receptive and Expressive Language skills:

Using animated short films provides an opportunity to practice sequencing the events in the film and having the student retell the story. You can focus on specific elements of story grammar (character, setting, plot, conflict, climax) while providing the child with the chance to be creative in how they interpreted the film.

These animated films allow you to ask questions in a variety of ways. You can target the essential who, what, when, where, why, but you can also increase the complexity of the questions. Asking questions pertaining to the theory of mind prompts the student to engage in higher-order critical thinking.

Theory of mind involves being able to think about what other people are thinking (T.O.M. can be informally assessed using the SLAM cards <– Click the link to see my post on informal assessment)

Many students have difficulty understanding Theory of Mind because it can be difficult to think about an abstract concept that cannot be physically touched.

“What is the character thinking?”

“What would the character do if…”

Want to get your student to talk? Using animated short films is a great way to break the ice, to build conversational opportunities, and to increase engagement. While watching the film you can ask:

What they liked or disliked

How they would change the ending

What dialogue they’d create if the characters could speak

Have you been trying to target writing with your students but they give you a face whenever you give them a writing prompt? Keep your students engaged by using the animated short film as the writing prompt to increase motivation. When working with my high school students, I always receive the same response when attempting to get them to write a paragraph..

Using animated films is an effective strategy to motivate my students to do a writing task without having to give them the traditional writing prompt. You can have the students create a script for the film and in a future session they can act it out and role-play. You could also have them create a newspaper or Rotten Tomatoes article in which they rate the film, write a critique, and create what the film’s profile page would look like.

Make sure your film isn’t too long. I usually choose the ones that are 2-3 minutes, especially if the sessions are 30 minutes.

Sometimes a title or thumbnail might fool you! Be sure to preview the video before using it with your students.

Brainstorm your questions before you do the activity so you don’t miss out on opportunities to target higher-order thinking skills.

I’d suggest creating a Youtube account that is only used for the videos and content that you want to use with your students. Within that account, you can also create your own playlist to keep all the videos saved.

If you can’t find a short film, commercials work great too!

What are some animated short films that you students enjoy watching? Drop your thoughts in the comments below!

Today, the preschool students used the book "Who's Hiding in the Snow?" to learn about arctic animals! I grabbed the book from my local library and made a quick reference sheet using clip art animals.
📚Reading books to your children plays a very important role in the development of their language skills and getting them ready for school! 📖